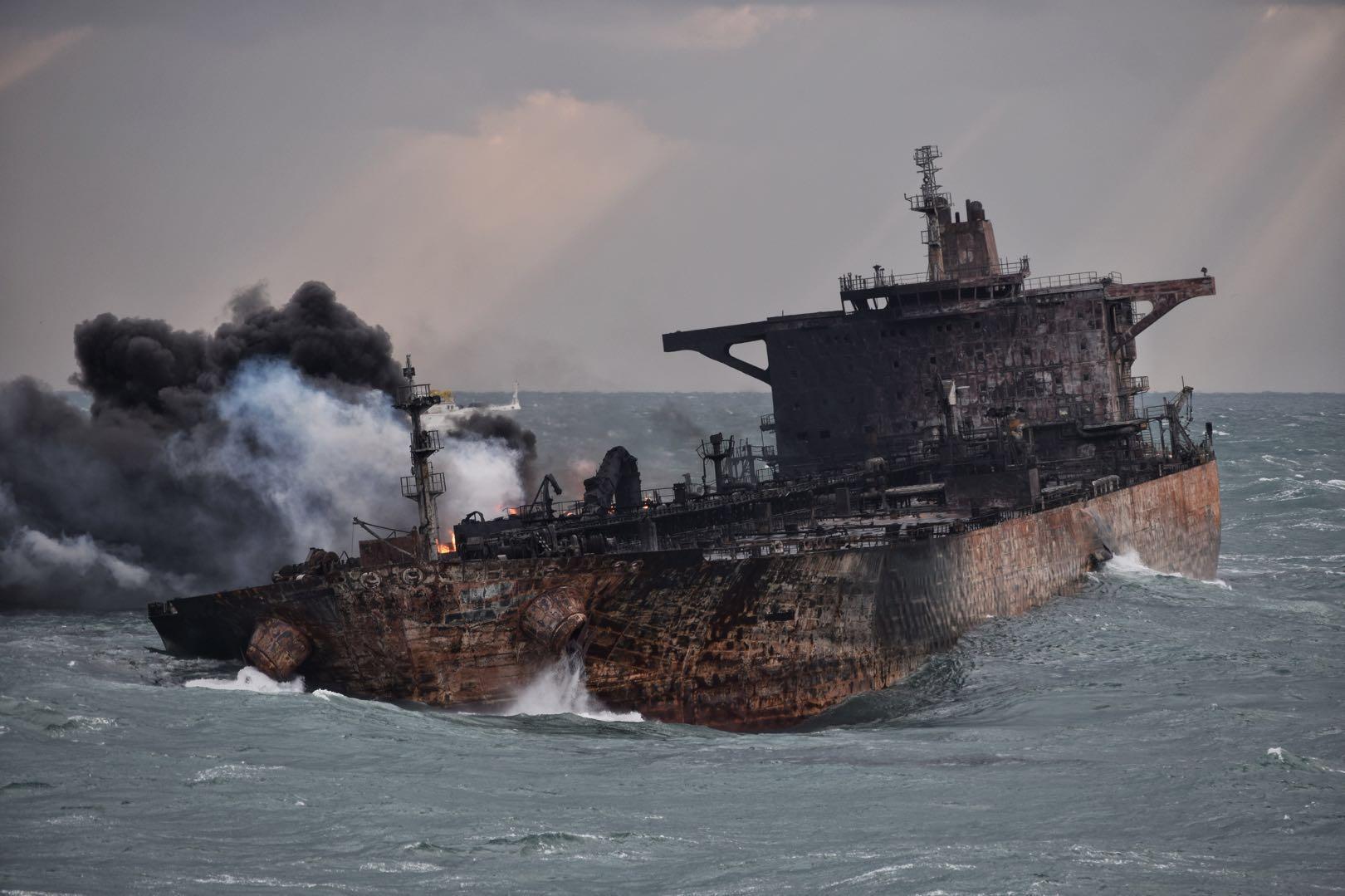 BEIJING (Reuters) – A sunken Iranian oil tanker may be leaking heavy bunker fuel as well as light oil off the east coast of China and the best remedy was to recover the vessel, officials said on Friday.
It was unclear how much bunker fuel was left aboard the tanker when it sank on Sunday after being ablaze for days but experts estimated it may have been carrying about 1,000 tonnes at the time of collision.

“There have been multiple appearances of oil slicks of different sizes and types at the sinking spot and nearby… the slicks exceeded 200 sq kilometers (77 sq miles) on Thursday,” Huo Chuanlin, of the State Oceanic Administration’s Ecological Protection Department, told reporters.

It was not immediately clear where the oil could wash up or the extent of the damage it could cause.

The large tanker Sanchi (IMO:9356608) sank in the world’s worst oil ship disaster in decades. The crew of 30 Iranians and two Bangladeshis are all believed to have been killed.

The tanker had been adrift and ablaze after crashing into the freighter CF Crystal (IMO:9497050) on Jan. 6. Strong winds pushed it away from the Chinese coast, where the collision happened, and into Japan’s exclusive economic zone.

Huo said no oil spills had been detected near the coast, though it was hard to predict the impact on ocean life.

Bunker fuel is the heavy oil used in ships’ engines and is difficult to remove from the sea once spilled, unlike condensate fuel – an extremely light form of oil – that was being shipped at the time of the collision.

Officials on Friday said the ship was carrying 111,300 tonnes of condensate before the accident. Most of the fuel evaporated after the ship caught fire.

Panama says sunken Iranian tanker had papers in order
PANAMA CITY (Reuters) – The Iranian tanker that sank after a collision in the East China Sea, causing the worst oil ship disaster in years, had its paperwork in order, according an initial review by maritime authorities in Panama, whose flag it was sailing under.

The large tanker Sanchi (IMO:9356608) sank on Sunday after crashing into the freighter CF Crystal (IMO:9497050) and drifting ablaze for days. The ship’s crew of 30 Iranians and two Bangladeshis are believed to have been killed.

Fernando Solorzano, head of Panama’s Merchant Marine, told Reuters there was no initial sign that the stricken ship was in breach of any security protocols. He added, though, that investigations could take months or even years to conclude.

“It had all the valid technical certificates on board and the financial guarantees required under international agreements,” Solorzano said in an interview late on Thursday.

An international team of experts from China, Iran, Hong Kong and the crew’s home countries would be analyzing the voyage data recorder, a device that monitors the vessel’s progress, to determine the cause of the collision, he added.

Although the Sanchi was Iranian, it was registered under a Panamanian flag, a practice that has become commonplace due to the strategic importance of the Central American nation’s canal. The Panamanian registry has over 8,000 vessels on its books.

Solorzano said all vessels sailing under the flag had to comply with strict requirements. He conceded the event could adversely affect the image of the registry because it is known for having a low rate of incidents.