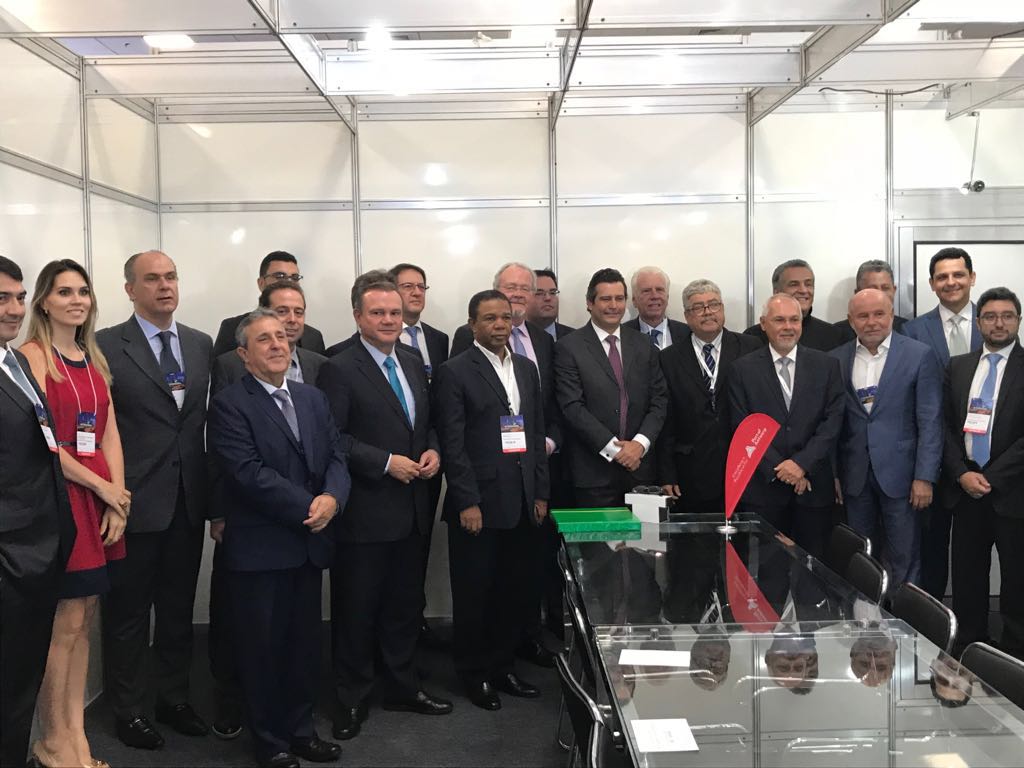 The port of Antwerp is to make its know-how and expertise available to further professionalise the management of ports in Brazil. It will do this by among other things providing a special series of seminars in two already active training centres for maritime professionals in Brazil. The initiative is laid down in a Memorandum of Understanding that was signed on Tuesday this week by Marc Van Peel with among others Maurício Quintella, the Brazilian minister of Transport, Ports and Civil Aviation. The port of Antwerp has already applied a similar model successfully in India, where a special training centre for maritime professionals has been set up in the Indian port city of Mumbai.

“Our training subsidiary APEC has demonstrable, relevant experience in training port professionals,” declared port alderman Marc Van Peel immediately after the signing. “Furthermore, Antwerp is a major trading partner for Brazil. Thanks to our services we will further develop this collaboration,” he concluded.

Brazil has 45 publicly-owned ports and 131 private port terminals. The ports are crucial for Brazil’s foreign trade, with no less than 98.6% of its foreign exports passing through them in 2015. And yet much work needs to be done: the logistical infrastructure urgently needs to be modernised, as one of the most important factors for success in order to boost the economy and to keep the country competitive internationally. The ports are governed by the Ports Act of 2013 which among other things requires their modernisation.

“It is against this background that APEC has been asked by the Brazilian ministry to make a wider contribution,” explains APEC managing director Kristof Waterschoot. “APEC is already well known in Brazilian port circles, as more than 660 maritime professionals from Brazil have so far attended a seminar or other training in Antwerp,” he continued.

But the need is greater, and so Antwerp and Brazil have undertaken to reform two existing training institutes on the APEC model, one in São Paulo in the South and one in Alagoas in the North. This means that Antwerp will be responsible for among other things designing tailor-made courses and supplying lecturers. “In particular, dockers have to be specially trained. Antwerp already has a strong reputation for the high degree of professionalism of its dock workers, and so we will develop a tailor-made programme for dock labour in collaboration with the Antwerp training centre,” Waterschoot explained.

With an annual freight volume of 7.1 million tonnes Brazil is Antwerp’s seventh-largest trading partner. Ports such as Salvador, Santos, Paranagua, Rio de Janeiro and Rio Grande generate large volumes of cargo with containers carrying deepfreeze goods and agricultural products, along with fuel derivatives and metal products going to and from. Indeed Antwerp has two local representatives to represent it in the Brazilian port community: Ricardo Sproesser and Henrique Rabelo.

“Brazil is the main gateway to South America for the port of Antwerp, and thus for the many Flemish and European countries seeking to do business there,” emphasised port alderman Marc Van Peel. “It is therefore essential for us to have a presence here in many ways, in order to raise the name recognition of Antwerp as the ideal gateway to Europe.”