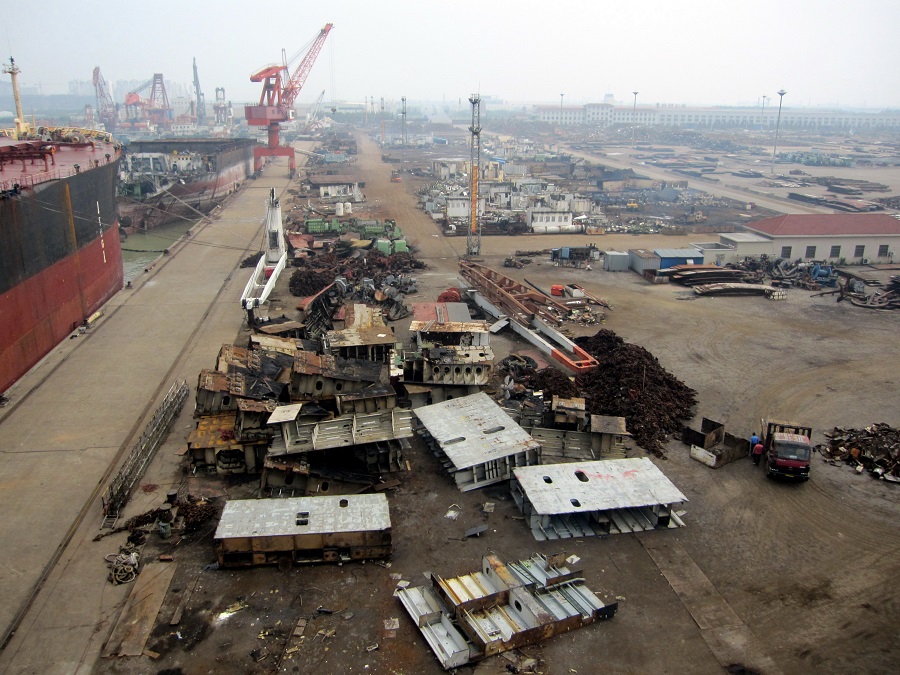 There were a total of 206 ships broken in the first quarter of 2018. Of these, 152 ships were sold to the beaches of South Asia for dirty and dangerous breaking [1]. So far this year, 10 workers have lost their lives and 2 workers have been severely injured when breaking ships in Chittagong, Bangladesh. Another two workers were reported dead after an accident at a shipbreaking yard in Alang, India.

2018 has so far seen a high number of fatalities at the shipbreaking yards in South Asia. Platform sources have recorded 10 workers who have lost their lives and 2 who have been seriously injured at the shipbreaking yards in Chittagong. A fire on the South Korean Sinokor-owned PACIFIC CAPE broke out on 18 February at the Jamuna Shipbreaking yard, costing the life of a fitter man, Harun, and causing serious burn wounds to workers Moajjem and Johirul. The breaking of the tanker EKTA at Zuma Enterprise yard has been particularly hazardous: there, two fatalities have been recorded on two separate occasions. Fitter man Muhammad Khalil fell from great height while working on the EKTA on 31 March; and only three days ago, on 24 April, Shahidul Islam died when hit by a falling steel plate. According to industry sources, the EKTA was owned by the Greek company Anangel Group, and, in the last weeks prior to its breaking, the vessel was operated by Wirana, one of the world’s largest cash-buyers.

Also in Bangladesh this quarter, Abul Hossain died in RA Shipbreaking yard. However, the local police and the yard owner claim that the cause of death was a heart attack. Another worker, Borhan, died in Premium Trade Corporation shipbreaking yard – in this case the yard owner is claiming that the cause of death was a road accident. The ASTUTE, which was sold for breaking by shipping company Teekay, was beached at the Premium Trade Corporation yard at the time of the accident. Another Teekay ship, TINA, was beached at Kabir Steel when Azahar Molla died after falling from height. Abdul Mannan Juarder was hit by a falling steel plate at H.M. Steel Shipyard. Md. Babul fell down from stairs when he was on top of a ship beached at M. A. Ship Breaking Ltd and got seriously injured – he was brought to hospital, where doctors announced his death. At the same yard, M. A. Ship Breaking Ltd, Shofiqul Islam died when he was hit by an iron piece. Worker Offil Rema died of burn wounds after a fire broke out in a tank at Khawja Shipbreaking yard.

On 28 April, on World Day for Safety and Health at Work, the Platform member organisations, OSHE and YPSA, are organising a demonstration in Chittagong to protest against the serious lack of safety measures at the shipbreaking yards and to denounce the particularly high accident rate at the yards so far this year. Demonstrations by the members will also be held on 1 May to mark International Labour Day.

There were victims in Indian shipbreaking yards this quarter too. The Times of India reported that two workers lost their lives due to a toxic gas leak on plot 32 on 14 March. Earlier that month it was reported that an accident happened on plot 7, where the tower of a rig crashed onto plot 9. The extent of damage and injuries caused is unknown. The lack of transparency on the conditions at the yards in Alang is disconcerting – no record of any accident is made publically available by the GMB, the local authority regulating the industry. The Platform has on several occasions called upon the industry and authorities to put on record every single accident which happens in the Alang shipbreaking yards. Injured and dead workers should never remain hidden and go forgotten.

Ship owners continue to sell their ships to the beaching yards despite the well documented deplorable conditions. The prices offered for ships this first quarter have been high in South Asia, especially when compared to the figures of last year. Whilst a South Asian beaching yard can pay about USD 450/LDT, Turkish and Chinese yards are respectively currently paying USD 280/LDT and USD 210/LDT. This situation led to especially a significant decrease in number of vessels recycled in China, where only 7 vessels were scrapped this quarter.

South Korean and UAE ship owners have sold the most ships to South Asian yards the first quarter of 2018 with 14 beached vessels each, followed by Greek and Russian owners. Shipping companies from the United States beached 5 vessels. South Korean Sinokor is, for now, the worst corporate dumper with seven vessels beached in South Asia in 2018. South Korean H-Line Shipping is a close runner-up, with five ships sold for dirty and dangerous scrapping on the beach. Following the ban on the import of tankers to Pakistan due to major explosions that occurred in 2016 and 2017, no tankers were sold to the Gadani yards this first quarter. However, Pakistan has re-opened to the import of tankers this week.

Only 3 ships had a European flag – Belgium, Italy and Norway – when they arrived on the beach. All ships sold to the beaching yards pass via the hands of scrap-dealers, also known as cash-buyers, that often re-register and re-flag the vessel on its last voyage. In this regard, flags of convenience, in particular those that are grey- and black-listed under the Paris MoU, are used by cash-buyers to send ships to the worst breaking locations. Almost half of the ships sold to South Asia this quarter changed flag to the grey- and black-listed registries of Comoros, Niue, Palau and St. Kitts and Nevis just weeks before hitting the beach. These flags are not typically used during the operational life of ships and offer ‘last voyage registration’ discounts. They are grey- and black-listed due to their poor implementation of international maritime law.